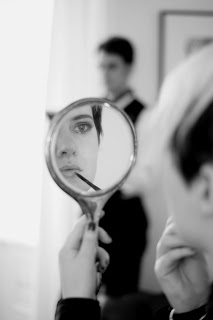 1. Light Asylum by Light Asylum
I love the androgynous vocals, in turn aggressive and operatic, and the frantic energy of the synths and rhythms. The lyrics also display a social conscience and sense of spirituality, which is good to see in electronic music.

2. Rien à Paris by Liz & László
A great single offering by this duo, I wish they would release a full album. As a collaboration between Arnaud László (Automelodi) and Liz Wendlebo (Xeno & Oaklander), it seems closer to the sound of the former band, with its elegantly blasé vocal stylings and alluring mixture of melancholy and catchy pop energy.

3. Born to Die by Lana Del Rey
Some musicians are embarrassed to admit to liking any chart pop, seeing it as something of a "guilty pleasure". Not I! Lots of gems of classic pop song-writing here, which transcend any divisions of genre or questionable promotional moves. My favourite is the soaring "National Anthem".

4. XII by Parallels
I have taken an interest in Parallels since their excellent album 'Visionaries' was released a couple of years ago. Their new offering seems more dancey and less introspective, however it has some wistful highlights such as Days of Summer, and a shimmering cover of Gowan's Moonlight Desires.

5. Kasiotone by Kid Kasio
Pure synth-pop, rich in textures and mannered vocals, seemingly destined to be described as "80s" by music critics. However the record leans more towards the funky, dynamic pop of the Thompson Twins rather than the sombre musings of Depeche Mode.

6. The Haunted Man by Bat for Lashes
A thoughtful set of songs that manage to be moving without being slushy, and hold your attention despite their slower pace, with deep, rich synths featuring quite prominently in the arrangements.

7. The Minimal Wave Tapes Volume 2
Another varied collection of minimal synth from different periods, my favourite track being Japan Japan by Felix Kubin. The 'robot voice' effect is used quite commonly by electronic bands but here it really hits hard, dispassionate yet full of menace.

8. Ad Astra by Jewels of the Nile
A very lush, rich sound, which makes a nice change from the more minimal stuff. Glamorous and sinister, with a special mention for 'Concierge' due to the screaming. I love me some screaming.

9. Distant Noises  - A Cold Wave Compendium by Other Voices
A nice variety of sounds from the Russian label, all coming loosely under the definition of cold wave. There are some more disco numbers like When I Acquire You by Venus in Furs, contrasting with pretty melancholy tunes like Alone by Sam Rosenthal.

10. Hyberbolic Masses by Soft Riot
A more introspective brand of electronica: one Canadian and an army of synthesizers engendering an atmosphere of quiet horror with commentaries on the way we live today.

MM Lyle is one half of A Terrible Splendour. Their debut album, Poseurs, will be released early 2013.