And You Will Find Them In The Basement 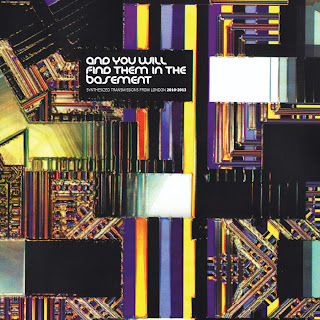 And You Will Find Them In The Basement is a compilation of synth driven tracks by London bands (with a couple of exceptions). It has been curated by at the artists involved and will be released in March 2013 on limited vinyl and digital.
Artwork and silkscreens were done by Jonas Ranson of Blacklist Editions . Design and layout by JJD aka Soft Riot.

My move to London from Vancouver in late 2007 was followed by a period of shock and re-adjustment. When that dust settled, I then climbed back in the saddle, on the prowl for signs of places where things of interest might be happening — music mainly. I eventually found myself under murky lights in cramped bars and clubs in East London, when Shoreditch was arguably at the height of its popularity. Often having to walk downstairs from the main bar, it was in these tucked away spaces that I unearthed a number of nights going on, generally falling into the vague synth, post-punk and “wave” scene — a general grouping of styles I found myself somewhat aligned to.

The majority of the players on this compilation met after converging in such places. Over the years these rituals took a number of different names: Brave Exhibitions, Reeperbahn, Decasia, The Liberty Snake, Endurance, Deus Ex Machina, Future Brain, Future Obscura and Never Come Back, etc.
In those places we found ourselves dancing to the same tracks and then striking up conversations over a drink in the cramped outdoor smoking areas. It came to be that we all had similar interests and motives, and at times the ability to finish off one another’s jokes.

Each of us had our hand in some sort of creative activity or another; music, film, fashion, what have you. As time went by, this loose group of individuals one by one became more active with the music they had set out to make. As the physical locations of these clubs we frequented migrated from Shoreditch north to even dodgier venues up in Dalston and Stoke Newington, we often found ourselves putting on each other’s bands and pulling from the same general pool for some hands to spin records in between performances.

After a few smoke pit conversations, there was a natural motion to go ahead and document some of these electronic sounds blasting out of the decibel-controlled basements of Hackney and Dalston. Inspired by classic compilations such as Flex Your Head and No New York, we felt a compilation of this music was the best way to get “something” out there. A number of meetings in drab pubs kick-started the process of getting something together, followed by a series of wordy and confusing emails, and then ultimately a more streamlined online forum. The results were passed on to a few outside parties and here we are! A 12” LP on Desire Records (an obvious thanks to Jérôme Mestre for that).

All of the artists on this compilation are based within the general madness that is London, with two exceptions: Gertrud Stein splits her time between London and Germany, and although Lebanon Hanover haven’t lived in London, we gave them an invite as they know most of us on this compilation and are considered part of the “scene”.